Back in Action and My Thoughts on Instagram Removing Likes

Hello readers it's been a while. These past four months I have invested in three different hobbies, worked on five short films, performed stand-up comedy, and purchased yet another bullet journal. Ah, bullet journaling the only consistent hobby.

Jumping back and forth between hobbies has always been the definition of my life style. Now that I'm older I'm able to understand the meaning of committing to a hobby, understanding the impact on my already suffering bank account and the marketability of the final product.

First, I tried painting squishies. I was inspired by Youtuber Mariah Elizabeth and her series called "Squishy Makeovers". My end goal is to learn to professionally paint them and make enough to sell as a vendor. I've considered opening an Etsy but I will have to conduct more research before going forward with the idea. I also plan on making homemade squishies and painting them accordingly to pride flags for Pride 2020.
Working with fabric paint for hours on end inspired me to pursue acrylic painting. I stumbled across this tiny canvas at Walmart and said to myself "I should start small". I've always been interested in creating sellable works of art on canvas but never actually quenched my creative thirst for painting until now. My end goal is to work with fluorescent paints on canvas like CriscoArt. Maybe even set up an entire gallery of just tiny paintings. The possibilities are endless. 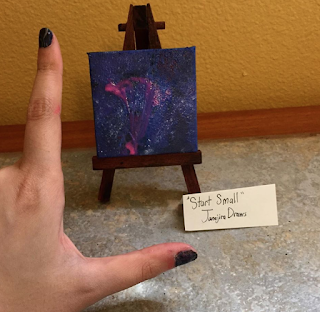 The last hobby I tried to pursue was nail art. And by that I mean I attempted a water marble design once again. I don't have any impressive pictures to show for it but I have firm belief that I've improved somewhat.

Massive support on social media and through family and friends has helped pushed me to continue pursuing art and trying new mediums. By following solely artists and cute animal accounts I have felt surges of inspiration and positivity. There have been times when I've seen phenomenal digital art and felt discouraged because mine is subpar. I have also fallen into the trap of becoming obsessed with monitoring likes but at the end of the day that's just the marketer in me screaming. This brings me to the topic from the title. Instagram has recently hidden the number of likes from the general public. Essentially I can see the number of likes on something I post but the general public can't see said number.

"We hope this test will remove the pressure of how many likes a post will receive, so you can focus on sharing the things you love," Mia Garlick, Facebook Australia and New Zealand director of policy, said in a statement.

In the article BBC also reported this would not affect business tools. Again, the likes are visible to your own posts so I don't feel this would impact my businesses. The point of Instagram doing this was to stop people from linking validation to a number on a screen. Especially younger teens.
How do I feel about this? I care enough to tell the world about its benefits but not enough that my personal life has changed in the slightest. I watched Youtuber Atozy react to a video of an "Instagram Model" hysterically flipping out because of this. It was ridiculous but a prime example of how toxic the obsession over likes can be. There is a fine line between monitoring likes for your business and your life revolving around likes. The same principles apply to other social media sites but Instagram has evolved from a collection of meal photos to providing conventionally beautiful people with billions of dollars for posts and setting a beauty standard.

I could write an entire novel about how the media corrupts female self-esteem. Anyway, my original point was; I think it's great that Instagram is recognizing this issue and taking a step to attempt to fix it. However I firmly believe there is still a long, long, long way to go in order to undo the damage on teen self-esteem inflicted by the media.